I have been an active investigator in the field of regenerative medicine in the US for many years. A major research project in my laboratory was the engineering of cartilage to repair the tissue damage suffered by osteoarthritis patients. I would like to point out that scientific research is almost always a long process, and to succeed, researchers must be prepared for failures and have unrelenting determination and persistence to explore the unknown and to gain experience and wisdom from their failures. In my own research journey, I have of course encountered my share of failures, some of which could be quite exasperating, but also instructional at the same time.  I would like to share with you a personal story to illustrate this point.

A few years back, we were working on developing a 3-dimensional biomaterial scaffold to encapsulate stem cells to form cartilage. To simulate the native fibrous matrix in cartilage, the biomaterial must be of minuscule dimension and uniform in size, to allow the stem cells to attach and grow. We finally decided that the best approach was to apply the method of electrospinning, whereby a stream of polymer solution was subjected to a very high electric field, which would force the stream to split into nano-dimensional sub-streams. With the simultaneous evaporation of the solvent, nanofibers would form to give rise to 3-dimensional scaffolds which could be used for stem cell seeding and ultimately the construction of engineered cartilage. Specifically, we were using a U.S. Food and Drug Administration approved biodegradable polymer to facilitate potential clinical use of our engineered cartilage in the future.

One easy way to describe our process is that we were applying electrospinning to prepare  ‘nano spaghetti’, such that the stem cells would grow in the interstices of the ‘spaghetti’ and form cartilage. Unfortunately, our initial results were not satisfactory nor reproducible, as the ‘spaghetti’ we made were unpredictably either too thick or too thin, even though the same electric field was applied each time. After a few months, frustration began to become despondency in the laboratory, and heaps of misshapen ‘spaghetti’ laid under the microscopes.

Around that time—I am not sure if it was from the heated debates between coworkers or the natural wear-and-tear of the air-conditioner—the laboratory began to feel hotter and hotter. We reached a most scientific consensus: we must first get a repairman to give the air-conditioner a check-up!

The moment the air conditioning mechanic stepped into the laboratory, he could see the sad faces all around. After some small talk, I told him how we had hit a wall in our research and showed him our ‘spaghetti’. I was of course not expecting that what then came out of the mouth of the ‘cool guy’ would bail us out of our conundrum!

The ‘cool guy’ said, ‘Have you paid attention to the temperature and humidity in your laboratory? These may affect the results of your experiments.’ While ‘temperature’ and ‘humidity” were certainly key issues that he, as an air conditioning specialist, would have to deal with on a daily basis, these were not top priorities on our checklist!

His remark was a wake-up call. We began to measure, monitor and carefully control the temperature and humidity of the laboratory during ‘spagetti” production, and we quickly succeeded in fabricating nanofibrous scaffold of the right fibrous dimension, uniformly and reproducibly!   This accomplishment squarely put us one step closer to the functional engineering of cartilage and other soft tissues. In fact, I should point out that the ‘cool guy’ proved to be as useful as he was instructional, as he also repaired the air-conditioner in the laboratory and thereby improved our work conditions!

Just as in scientific research, all of us inevitably meet setbacks in our daily lives, and there are always more than one solution to most problems. My experience has taught me that you should spend time not only with people whose background or interests are similar to yours—if you do, you could continue to make the same mistakes and get stuck in a dead end. You should also seek opinions and views that come from people who are from a different background and be open and magnanimous to these views. If I had not paid attention and disregarded what the air conditioning repairman had said, I would have missed the cues that eventually led to successful fabrication of the perfect 'spaghetti'.

One purpose of a university education is to cultivate creativity in young people, to help them think outside the box when obstacles seem too great to surmount or when there seems to be no way out. In 2018, my colleagues and I developed a credit-bearing general education course entitled 'Live to Flourish: The Science and Practice of Positive Psychology'. Its objective is to help students navigate life’s uncertainties by adjusting their habits, thought process, and interpersonal relationships through the development of evidence-based positive behaviour, thinking, and social skills. This is the fourth year since the launch of the course, and the response has been overwhelming—students are very interested in the course, as reflected by the increment of course quota from 80 at the beginning to 320 in the coming semester, and they attach a great deal of importance to it. I have met with students who have taken this course and am glad to learn that they all feel that they have benefitted from it. I very much hope that every CUHK student can have the chance to meet a ‘cool guy’ on their paths when they encounter setbacks.

Upon successful completion of the nanofiber fabrication process, I dyed (chemically, not by Photoshop!) the nanofibers and stem cells fluorescently red and green, respectively, and took a picture under the microscope to use on greeting cards to my friends. Well, some of my friends began to complain that they have received too many from me!  Here's a card for all of you. What do you think of this greeting card featuring beautiful and colourful nanofibers? 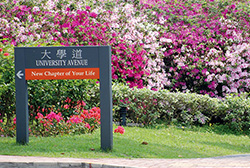 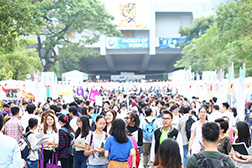 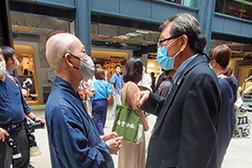 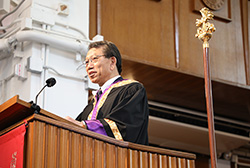 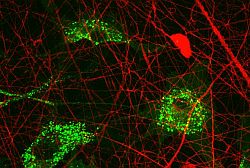 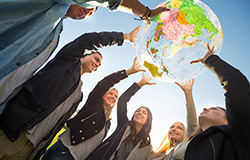 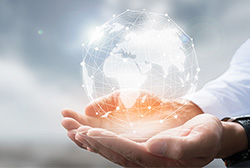 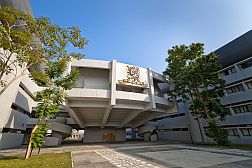 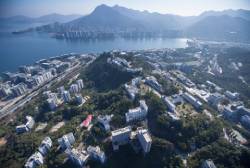 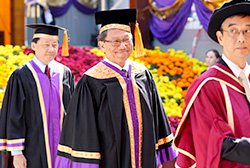 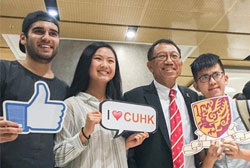 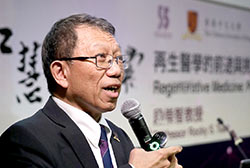 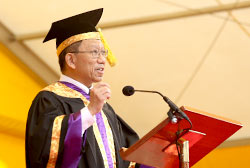 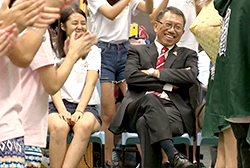 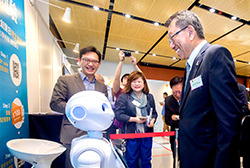 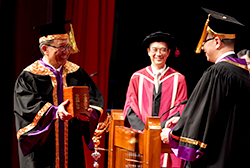 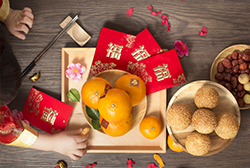 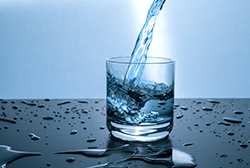 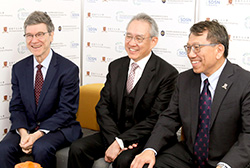